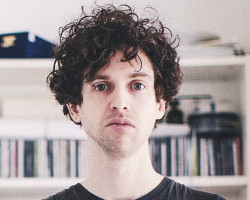 Alan Holly is an artist and filmmaker from Dublin, Ireland. Alan has been working in the industry for the past ten years, as an animator, director, writer, editor and background artist. In 2010, he was one of the founders of the studio And Maps And Plans, where he has been working closely with a group of friends to produce artistically driven animated film projects, including several award winning films.

Alan Holly is part of the main jury for the competition programme for Nordic and Baltic short and student films. His last film Coda is screened in the Cartoon d’Or programme.