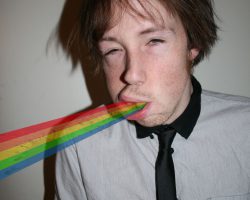 Captain Credible is the crazy-scientist project of Daniel Eugene Lacey-McDermott. A curious artist who emerged from Trondheim in 2008, and has been terrorizing audiences all over Europe ever since. Resurrected as a meta-musical presence in a not-so-easily defined genre, he claims Aphex Twin, Sex Pistols and Aaron Carter have helped him form his own image. The Captain refers to his sounds as “filthy drunk beats bathing in a lake of melting synthesizers and old Nintendo cartridges”. On a stage filled with home made electronics and songs about dead cats and pure code the Captain regales his listeners with epic adventures through time and space.

With jaw dropping performances at festivals like Øya, Hove, by:Larm, Slottsfjell, Ragnarock (Milan), Pictoplasma (Berlin) as well as support tours for Casiokids, The Show Is The Rainbow and Slagsmålsklubben he might be considered underground, but is making waves in his own right.

His debut EP Planet of the Eternal Electro Breakdance Orgy was released on the small but credible Norwegian label How Is Annie Records and his second EP Mountain Cloudboy gained notoriety online. October 2015 marked the release of the first EP in a series of three printed circuit boards on the Metronomicon Audio label. This EP Dead Cats is unique in that each physical copy of the printed circuit board is a different version of the EP. The last track on the EP main.h is generated by the microcontroller on the circuit board using a bunch of complex 8 bit math equations and your download code. Simply plug in your headphones and accept the harsh reality that is the robot takeover of the cultural market.

Captain Credible will perform live as a part of Animated Club Friday night on the 11th of November in Litteraturhuset, together with Daniel Wiklund.