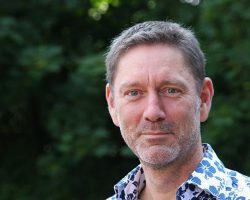 After a short but dynamic experience in psychiatric nursing and art therapy, Erik van Drunen took a second chance and studied animation and photography at the Academy of Fine Arts and Education in Tilburg. Since graduating the path has led him through a wide range of activities in the field of animation and film education. He has organized workshops and master classes, lectured about animation and served on selection committees and juries, which gave him the opportunity to read piles of plans and scripts and see films in all stages of production. As a freelance film and animation curator he works for film festivals such as Go Short Film Festival Nijmegen and FANTOCHE and as script coach for animation. He lectures history and animation theory at LUCA School of Arts in Brussels and the Film Academy in Amsterdam. The noisy but inspirational contact with the rising troops of new animation directors prevents him to forget how it all begins and means a close contact with the future.

Erik is this years seminar moderator.