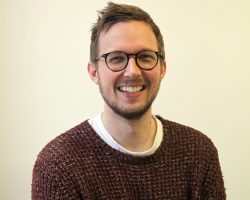 Felix Massie is an award winning animation director and published children’s book author based at the Nexus studios in London.

His films have been screened at over 100 festivals worldwide and his latest, In the Air is Christopher Gray, won the Grand Prix at Encounters in 2013 making it eligible for Oscar consideration.

More recently he has been making children’s books such as ‘Terry Perkins and his upside down frown’ and ‘George Pearce and his huge massive ears’ (both published by Frances Lincoln) and most recently he directed a 360 VR film for Google Spotlight Stories called Rain or Shine. The latter one which doesn’t contain a single stickman. His 14 year-old self would never forgive him. Together with Mark Davies, Felix will speak about the making of Rain or Shine on Friday, November 11th at 14.00.