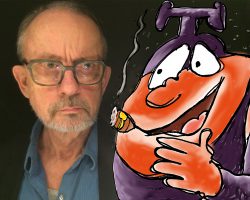 Gunnar Wille is a Danish producer, director, multi-artist, author and animation director, which has worked with film, theatre and television since the 70s, and is regarded as a veteran in the field of Danish animation. Throughout his career he has written, designed and produced six TV series, and directed, designed and written 13 animated films. Wille has experimented with computer animation to make high quality, low cost animation for broadcasting productions. The best known of Wille’s works is the Children’s TV series about the naughty character Skrumpen. In addition to this Wille has some 20 books and nine plays on his resume, and numerous radio plays based on his own books. In 1992 he founded the animation program at the National Film School of Denmark in Copenhagen and has led the institution until October this year, when he retired.

During the festival Wille will present an exhibition of his works at Litteraturhuset in Fredrikstad, and hold a lecture with selected films, on Saturday the 12th of November.