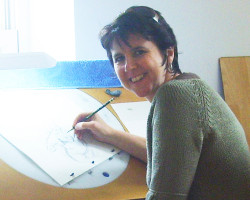 British animator Joanna Quinn is regarded as one of the most celebrated figures within the field of animation. Her draftsmanship, wonderful characterisations and humour mark her out as a truly unique talent. Joanna has won 90 major animation awards, including Emmys, Baftas and two Oscar® nominations, one for Famous Fred (1998) and one for The Wife of Bath (1999). She’s been honoured with many retrospectives of her work throughout the world, and lectures at some of the most prestigious universities and film schools both in Britain and abroad. In 2014 she was awarded the prestigious ASIFA International Animation Laureate.

She first worked with Les Mills in 1985 on her graduation film Girl’s Night Out. This film introduced the central character of Beryl to audiences and successfully launched Quinn’s career as a master animator. The two have worked closely together ever since, eventually founding their production company Beryl Productions. Their last short film, Dreams & Desires – Family Ties, was written and produced by Les. It collected over 45 major awards, including the European Cartoon d’Or 2006. Quinn and Mills are currently in production of their new short film Affairs of the Art.

Joanna Quinn and Les Mills will talk about their career and work at the In Production seminar on Friday morning.