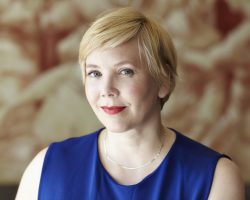 Kristine Knudsen is a producer originally from Hammerfest in the North of Norway, who works both in Norway and Germany. She graduated as a producer from Filmakademie Baden-Württemberg in Germany, followed by MEGA Master in Ronda and EAVE. In 2006 she established the production company Knudsen & Streuber Medienmanufaktur GmbH in Berlin together with Tom Streuber, and in 2010 she established Den siste Skilling AS in Bergen. Her track record includes the live action feature films Fashion Victims (Reine Geschmacksache) from 2007, Mercy (Gnade) which premiered in competition at Berlinale 2012 and last years Revenge (Hevn). Currently she is producing the 3D CGI animation feature film Richard the Stork (Richard storken), sold worldwide and which will premiere during spring 2017. Knudsen will participate in the Nordic Animation Forum on Saturday, where she will present her on-going work on Richard the Stork.