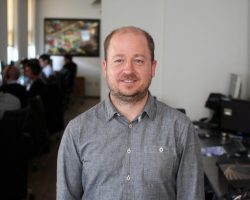 Mark started his career in 1998 working as an animator on several children’s television series in his home city of Toronto, Canada. In 2003 he moved to London, England to work on a short term commercial project at Realise Studios, which led to an opportunity to join the Jim Henson’s Creature Shop as both an animator and with the Houdini effects team. In 2006 Mark had a memorable stint at Blue-Zoo Productions working as lead animator on the vastly underrated television series Those Scurvy Rascals. Since 2007 Mark has worked full time at Nexus Productions as a project lead, technical director and CG supervisor. Projects he has worked on at Nexus include two Cannes Golden Lion winning commercials (Johnny Kelly’s Chipotle Back to the Start, Smith & Foulkes Honda Grrr!), the Oscar nominated short film This Way Up, and commercial campaigns for Coke, Facebook, Hotels.com, King Games, Vodafone, Bacardi, and the Royal Bank of Canada. Mark spent most of 2015 working as a project lead on the interactive, 360 film Rain or Shine for Google Spotlight Stories, which he will speak about together with director Felix Massie on Friday 11th at 14.00.