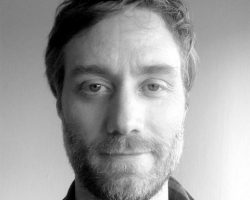 Mats Sivertsen is an animator, designer, cartoonist and visual artist from Inderøy, now living in Oslo, working in several different mediums. He has more than 15 years experience in design and motion grapichs, including Gazette (Itera), Gosu Design (Sixty) and his own business Aktuba Ink, with clients including NAV, TV2 and the Statens Vegvesen, which has granted him several awards and nominations at various design awards, including Grafill’s design award Visual. His resume also includes cartoons and a children’s book, released through NoComprendo and his own publishing company. Mats Sivertsen has had several exhibitions in cities such as Oslo, Baltimore, Inderøy and Richmond in Virginia USA. As an animator and VJ, he closely cooperates with the Oslo-based inde-rock band Radio9, which he creates live-visuals for, in addition to making commissioned films. Mats Sivertsen is part of the Animated Club concept which takes place Friday, in collaboration with Mesak.