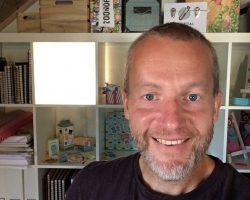 Nick Simons is a British writer, producer and presenter who has lived in Fredrikstad since 2011. Nick has over 20 years experience creating and producing animated, live-action and interactive content for kids, working at the BBC, NRK and for various independent production companies. In partnership with illustrator and storyteller Camilla Victoria Storm, Nick set up “Sprocket” in 2015 to work on books, animation and all sorts of other projects involving words and pictures. Nick and Camilla are currently producing a 20-episode animated series for a global kids network, and their first illustrated novel, “Elma the Elf” is published in October 2018.

Nick is part of the jury for commissioned films.