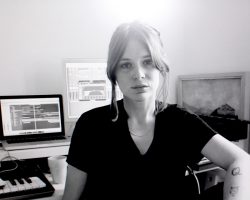 During the last decade, the multi­artist Quiltland aka Frida­Li Lövgren has been active first and foremost as an experimental electronic musician. Her sound and genre could be described as either Techno, Ambient or Synth­Pop, but also with touches of Euro House and Trance, as well as added vocal elements. This has resulted in and is comprised of releases of her music through both international and Swedish labels, as well as collaborations with artists that work in widely different contexts. She is mainly educated in Textile Art, and has been hired as a Pattern Cutter. This translates to her art in the way that a distinctly physical feeling permeates her music, which runs from weight to transcendence, through air and echoes. There has also been a strong visual border present, where specially made visual projections have been produced for every live show. Many of the shows have been improvised and only shown once, and would better be described as performance art, where all of her influences have been filtered through feverish dream sequences and surreal soundscapes.

Quiltland is one of three music artist whom to preform at the Animated Club at Friday Night in collaboration with Mari-Liis Rebane.