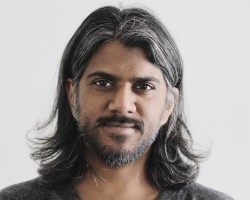 Sunit Parekh-Gaihede is a creative director and vfx-supervisor based in Copenhagen, Denmark. His work has spanned fifteen years and three continents and includes film, high-end vfx, animation, interactive media and software and hardware product development. For the last few years, he has directed commercials, commissioned films and other projects at his multi-disciplinary studio, Hydralab, which he founded in 2006. Prior to starting his own company, Sunit worked on high-profile projects such as Matrix:Reloaded, Hellboy and League of Extraordinary Gentlemen. He has also directed performance installations and short films. As an educator, Sunit regularly works with The Animation Workshop, a leading European animation school, where he has been integral in developing part of the core curriculum, and where he continues to teach and consult. His first short film Machine is selected for the Nordic and Baltic competition programme this year and was also screened at the international animation festival in Annecy. Sunit will present his work and studio during the Nordic Animation Forum on Saturday.