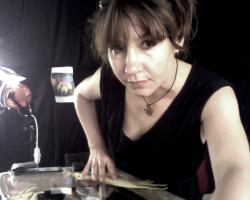 Tine Kluth is a German director, animator, illustrator, storyboard artist and dancer, based in London. After studying at the Filmakademie Baden-Württemberg, she produced her debut film Kater, which received a lot of attention at several international film festivals. This recognition gave her the opportunity to work on several international projects such as the TV-series Shaun the Sheep, Timmytime, Dragon and Celebrity Deathmatch. Tine has worked on the award-winning German short film Tomte Tummetott (2007) and on several music videos such as ZeiDverschwändung by the popular German music band Die Ärzte and Carl Carlton’s King of the USA.

Tine loves to try out different styles and is a great improviser, which gives her the opportunity to work on an array of different projects and which comes in handy for those ‘needs-to-be-finished-yesterday’ films. In addition to her work for big studios, she also works on her own personal projects in her home studio in London.