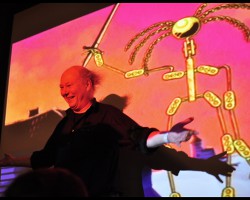 Fredrikstad Animation Festival 2010 was officially opened by Lotte Grepp Knutsen from the Ministry of Culture. The opening film was the norwegian feature Elias og jakten på havets gull, produced by Filmkameratene and directed by Lise I. Osvoll. This was the first official screening of the film.

In 2010 over 200 films were submitted for the competition programme. 72 of these were screened at the festival. 2010 was also the first year the commissioned- and children’s film competing programmes were introduced.

Børge Ring and Kaj Pindal
This year’s Lifetime Achievement Award was awarded to the Danish animators Børge Ring and Kaj Pindal, for their lifelong work in animation. The award was given during an honorary dinner for the two, live streamed from the Ribe Animation Festival in Denmark to Fredrikstad as a part of the Award Ceremony.

Fredrikstad Animation Festival’s Lifetime Achievement Award is chosen by the festival board of Norsk Animasjonsfond.

Nominated for the ANOBA award:

When I am King
Norway/Netherlands
Director: Sverre Fredriksen

The audience award is chosen by the festival audience

Produced in collaboration with Norsk Filminstitutt

Nick Fletcher, lead editor of Shrek Forever After, gave a presentation of the various development stages of an animated feature in the DreamWorks system. By using animatics and various edited versions of the film, Fletcher showed an in depth and thorough look at the development of both the characters and storyline in Shrek Forever After.

Paul Dutton, co-director of The Illusionist talked about the animation, the story development, and about the conditions of which the movie was produced. The Illusionist is based on a script by Jaques Tati, and is directed by the French auteur Sylvain Chomet.

Lastly, Chris Lavis and Maciek Szczerbowski talked about their thoughts on idea- and script writing. They presented the work they did on their Oscar nominated short Madame Tutli-Putli, as well as Higgelty-Piggelty Pop (on which they worked with Spike Jonze and Meryl Streep), and their new independent production L´Anneé de L´Os.

Other presentations and events

Professor Isaac Kerlow held a presentation on new trends in storytelling, style, and themes within animated film. He gave an overview of animation techniques and different approaches of the subject.

Alexey Alexeev gave us a presentation of his humorous and original universe. He spoke about his biggest success, Log Jam, a series of short animations bought by Nickelodeon and Canal Plus France. During the festival there was also an exhibition at Verdensspeilet with photos of his previous productions.

Before and during Fredrikstad Animation Festival, music students from Kulturskolen in Fredrikstad had a one week workshop with jazz musician Nik Phelps. Saturday November 13th the result of the workshop was presented by playing along to Four Elements, an animation made by pupils in the nearby area under the leadership of animators Gitte Ous and Katz Plunkett from E6 Medieverksted.