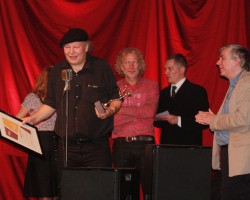 During the festival, over 100 shorts films, 12 feature films and 2 documentaries were screened. One of our main tasks is to award the best baltic- nordic animated short film with our own Golden Gunnar statuette. In 2011, about 200 short were submited and 74 were selected for the competition programme.

Awarded by the festival board.

The Lifetime Achievement Award 2011 went to Gunnar Strøm for his life dedicated to animation. He was a key player for establishing the animation education at the University-college in Volda and has worked indefatigable as an ambassador for Norwegian animation.

During the seminar the festival presented three directors with different approaches in the art of animation: Ren & Stimpy legend John Kricfalusi, director and designer Tod Polson, and the independent animator Rosto.

John Kricfalusi is known as a master in hand drawn character animation. During his presentation he told an enthusiastic audience about his sources of inspiration, with examples from well known animation films and classic Hollywood films. Later, the festival screened a retrospective dedicated to rare films by Kricfalusi.

Tod Polson worked many years along with designer and illustrator Maurice Noble, and has also written a book about him who was Chuck Jones’ most used layout and background designer. During the seminar Polson gave us a close up on Noble’s work with film and design og film.

Rosto – making of The Monster of Nix

The Dutch artist Rosto are one of the most extraordinary directors on the international animation scene. In a talk with animation expert Joakim Pedersen, Rosto told the festival audience about his work, and the creation of the imaganary world in his latest film. Rosto also presented a retrospective programme during the festival.

Other presentations and special screenings

The festival was opened with a pre-premier of Arthur Christmas and the animation directors Seamus Malone and Alan Sort was present and held a lecture about creating a modern version of Santa’s North Pole. Malone and Short was key members of the staff of the film and has worked at Aardman studios for a long period.

The Legendary Producer of Disney Don Hahn, visited the festival in 2011 and gave an exclusive lecture on the opening day of the festival. Hahn is the man behind classic films as Who Framed Roger Rabbit?, Beauty and the Beast and The Lion King, and presented the secret behind Disney’s success during the 80s and 90s.

The 2011 festival was produced by Norsk Animasjonsforum and the festival administrator was Festival Director Trond Ola Mevassvik and Festival Coordinator Magnus Eide, in co-operation with: