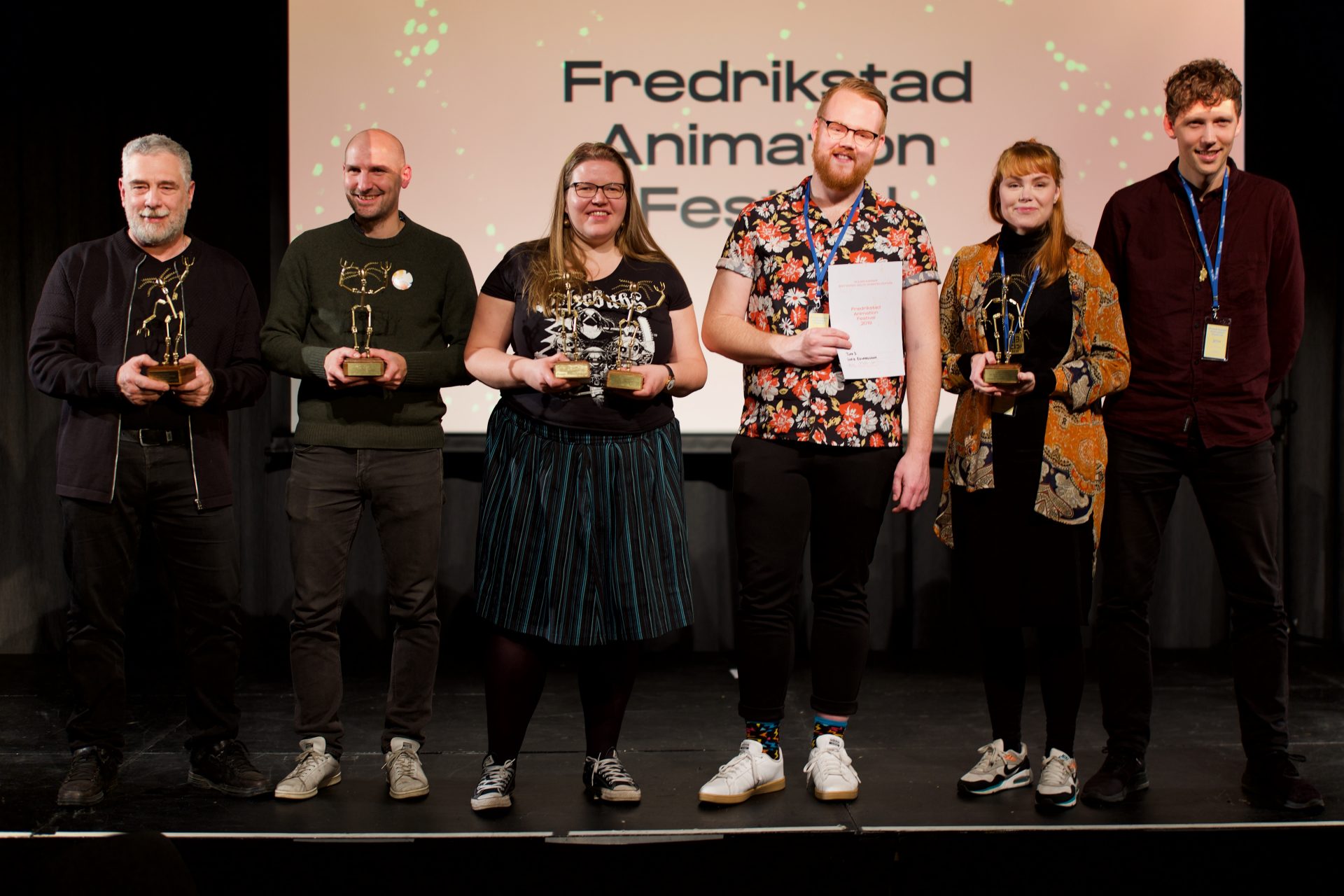 Fredrikstad Animation Festival (FAF) 2019 was held from 24 to 27 of October at the Fredrikstad Kino and Litteraturhuset in Fredrikstad as the main venues. The festival is the leading animated film festival in the Nordic region and presented a wide range of animated films with the focus on the Nordic-Baltic animation scene. The festival experienced growth in its public audience and has strengthened efforts for both the public and industry in 2019.

The Fredrikstad Animation Festival held an annual competition program for Nordic-Baltic animated films. In 2019, a separate competition for feature films was also introduced. After seeing the production of feature-length animated films grow in the last 10 years in the Nordic and Baltic regions, it was natural for the largest Nordic festival to include this new category in the competition. The festival included six feature films, 20 short films, six children’s films, and 11 student films.

The job of selecting the winners of this year’s Golden Gunnar fell to our three juries, composed of a global team of industry professionals:

Sounds Good
Director: Sander Joon
Jury’s motivation: This wonderfully playful film oozes with humor, acute observations and great ideas. It displays a strong sense of timing, design and a seamless blend of techniques that impressed the jury. It’s a pleasure to watch and an outstanding film.

Jury’s motivation: The process of choosing a winner was surprisingly easy. There was no doubt in our minds as there was one film that clearly stood out among the others. Technically wonderfully executed, stylish, appropriate, innovative, and humorous, the film was unanimously selected as this year’s winner.

Jury’s motivation (they wrote a poem for the occasion): A film that made us smile. Not too much. Not too little. Just like a good kiss that makes you chuckle with bliss.

Jury’s motivation: The first film to win the Golden Gunnar in the new category of Best Animated Feature is a touching and intelligent movie with an original topic. It displays a lot of humor and tenderness, without resorting to clichés.

The story is told with minimalistic animation, but the rhythm and the amazing voice work makes it emotional and relatable. The movie very effectively makes us feel what the characters are going through. Many movies tell stories about someone who wants to leave small cities. This is a story about a boy who wants to stay.

Jury’s motivation: The winning film is in equal parts funny, sacral and contemplative. Dancing between modernity and history, it seems grounded in reality, yet not. We like its visual language, humor and delicacy. It leaves us with many questions, as this film has made us consider that there is life even within that which seems still.

The festival also showed five other short film programs, that were selected by the festival administration, to expand the program and show some of the best international animated films.

Best of International Shorts 1 and 2

Two programs that were 80 minutes each that consisted of 17 animated short films from other European animation festivals.

Seven animated short films or series episodes in the theme of satire. Four of the films were from guests of the festival.

Five animated short films for the youngest of us all.

Entries for the Nordic-Baltic competition was at a record high. Therefor 10 addition student films were shown outside the competition.

Screenings and other events throughout the year

Animated at Kulturhuset and TÆPS

A total of 9 screenings of animated short films were held at Kulturhuset in Oslo and TÆPS in Fredrikstad. The program had several themes, for example student films, Oscar nominees and FAF winners.

In partnership with Nordic film days at Lübeck in Germany, two of the winning films from FAF 2019 were shown.

FAF entered a co-producer agreement with the music festival, Månefestivalen, on an exhibition of the works of short filmmaker, Kristian Pedersen. All the filmmaker’s short films were shown in the Old Town of Fredrikstad from 24 until 28 of July.

The guest of honour at FAF 2019 was the Norwegian graphic designer and animator Anna Tystad Aronsen. With a career that spans five decades Anna Tystad Aronsen is a pioneer in Norwegian animation. For several decades she was the ‘animator at NRK’. She got her first assignments for NRK in 1963, she was permanently employed in 1979 and she was head of the graphic studio from 1993 until she retired. During the festival’s opening ceremony at Litteraturhuset in Fredrikstad, Anna Tystad Aronsen received the festival’s Lifetime achievement award for her lifelong work in animation in Norway.

Michael Frei, an award-winning short film director, along with Mario von Rickenback developed 2D hand-drawn films into small interactive games. In the seminar, Frei showed in detail how the project worked, and the technical transfer from one medium to another, with a special focus on the artistic challenges they encountered.

Checkered Ninja achieved great success in both Norway and its home country, Denmark. It became a cult hit with great audience appeal despite its more adult content than the average 3D animated film. Director Thorbjørn Christoffersen presented a “making of” the film during Friday morning. He showed how the film came to be and the production development of the characters and story in the film.

Starburn Industries: Animation and Writing for Satire and Comedy

With their highly acclaimed Oscar-nominated stop motion feature film, Anomalisa, Starburns Industries proved to be an innovated and imaginative production company. Specializing in stop-motion, tradition 2D and CG animation, as well as live-action projects, the studio has delivered a wide range of productions for film and TV. In a conversation with the moderator, David Skaufjord, Duke Johnson, and Dino Stamatopoulos talked about how they go about creating animation content for film and TV and talked about their experiences of developing animation for the satire and comedy genre.

A seminar focusing on the Nordic animation industry was also held during the festival. The seminar was a collaboration between different industry organizations from the Nordic countries like, ANIS – the animation association (Denmark) and SAAVA (Sweden) as well as the festival organizers, the Norwegian Animation Forum. The main part of the seminar was a presentation of different filmmakers, producers, and studios from Norway, Finland, Denmark, and Sweden, followed by a panel discussion.

During the forum, there were the following presentations: Terhi Väänänen from Finland, presented studio productions and various animated short films and series from Pyjama Studios. Rasmus Sivertsen gave a Work In Progress look at the 2021 film Helt Super. Mikael Lindbom gave a presentation about Dockhus Animation, one of the most important animation studios in Sweden. Irene Sparre showed off her work from international clients from the studio Sparre Production.

Other events and exhibitions

The festival opening ceremony was held at Litteraturhuset and hosted by the county councillor for culture and integration in Viken, Camilla S. Eidsvold. The program included awarding the Lifetime Achievement prize to Anna Tystad Aronsen, presenting the festival’s programme, and screening the film Human Nature, by Sverre Fredriksen, Menneskets Opprinnelse by Pjotr Sapegin and Moral Orel: Help by Duke Johnson.

Meeting with Dan Harmon, Creator of Community and Co-Creator of Rick and Morty

The festival’s main guest was the American screenwriter and series creator Dan Harmon. He is the man behind the comedy successes Community and Rick and Morty. In a conversation with the moderator David Skaufjord, they presented his creative works and approaches to creating good TV shows and series with a focus on the script process. In connection with the event, two episodes from The TV series Rick and Morty were shown.

In a conversation with animation experts Gunnar Strøm, life and work of the festivals guest of honour Anna Tystad Aronsen was presented for the festival public. Nillie Tystad joined the conversations which centred around the earliest times of Norwegian animation history and how animations made itself seen in the news from early on.

As part of the focus of the festival was on the comedy and satire genres, the NRK editorial team Satriks held a presentation of how they make the series, which has been running for several years on NRK. The programme uses animations as an element for its satire production which has both created excitement and controversy.

The exhibition was held at the Litteraturhuset during the festival week and was dedicated to one of the films that was in the competition program. The exhibition showed 30 dolls that were used in the 2-minute-long film, Human Nature.

A seminar for animation, media, and art in secondary school and higher education was presented on the opening day of the festival. Through to lectures with filmmakers from the animation world, students learned how to make animated films. The speakers were the award-winning short filmmaker Kristian Pedersen and line producer Charolle Schanzes from the Danish studio SunCreature Studio. The speakers talked about how they got to where they are today.

In connection with the first screening of the student films and Educational seminars during FAF, a portfolio panel was put together to assess the work of young filmmakers and students, while at the same time introducing key peoples from the film and animation industry.

As part of the focus on young people, the festival invited three central educations institutions in animation and media production to visit over 300 secondary students in the Viken county.

A two-day workshop for young people aged 16 to 20 was arranged during the festival weekend at E6 – Østfold media workshop. The workshop focused on different variations in stop-motion animation and allowed the participants to make their own short project films. The workshop was led by renowned director and animator Eirik Grønmo Bjørnsen.

In partnership with the children’s culture centre, Qlthus, all 3rd graders in Fredrikstad were invited to contribute to a 12 square zoetrope strip, where the best contributions were exhibited at the Fredrikstad Kino.

In connection with the screening of separate film program for the kindergartens in Fredrikstad, the children had the opportunity to draw with chalk on the Gågata outside the Fredrikstad Kino.

Saturday during the festival was dedicated to families with a customized program of family movies, activities, and entertainment. Activities included an open animation workshop and drawing workshop. In connection to a screening of Kaptein Sabeltann og den magiske diamant, Captain Sabertooth was there prior to the screening.