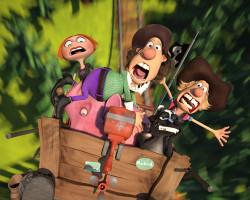 As part of the celebration of Qvisten Animation, we invited two of the studio’s collaborators to present their newest projects.

Illustrator Lisa Aisato and director Kristin Ulseth will present their upcoming short film Odd is an Egg, which is an adaptation of Aisato’s own children’s book. In this work in progress presentation they will talk about the adaptation and the development of the story from a graphic based book to an animated short film.

Øystein Dolmen and Eric Vogel follow with the presentation of their feature Two Buddies and a Badger (Knutsen & Ludvigsen og den fæle Rasputin, 2015), which has been a major success at the cinemas this fall. The film is based on the universe created by Øystein Dolmen (and creative partner Gustav Lorentsen) and produced by Eric Vogel. Together they talk about the making of the film with a focus on the development from crazy and anarchistic ideas and gags to a major 3D animated feature.

Part of this seminar will be held in Norwegian, with the option of an English translation upon request.